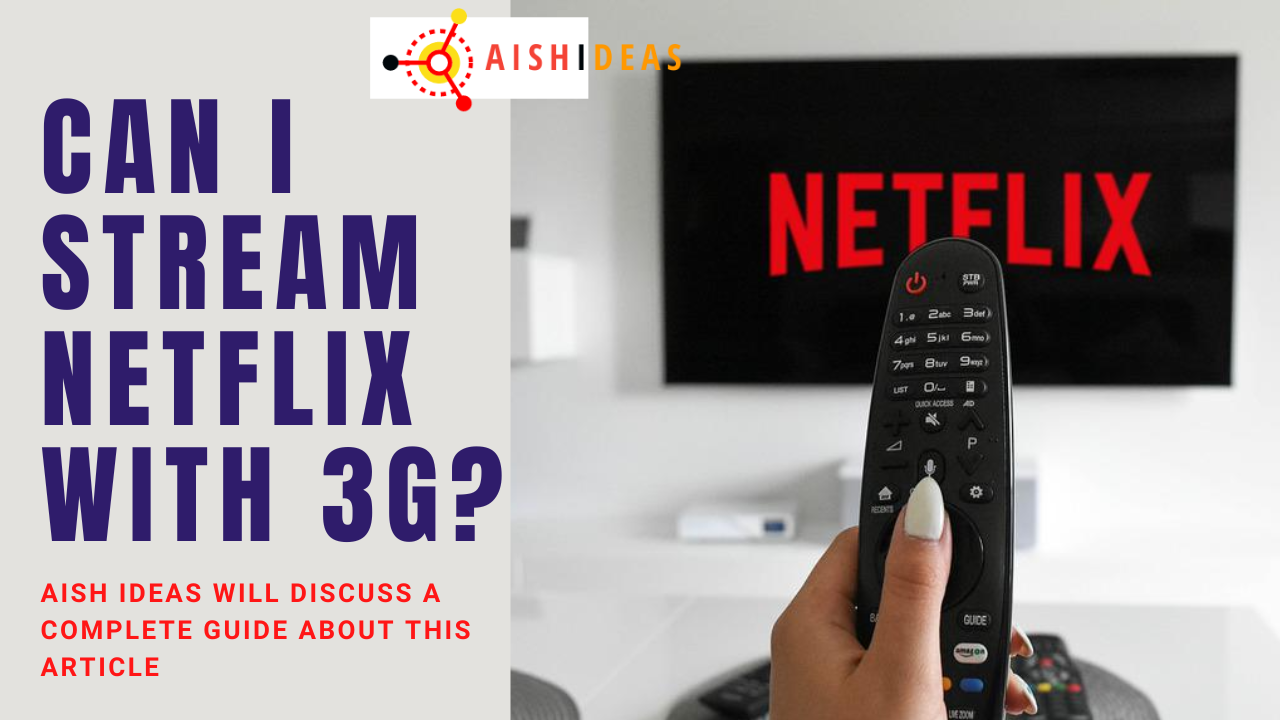 In This article, Aish Ideas will discuss a complete guide about “Can I Stream Netflix With 3G?” However, if you are experiencing buffering and low video quality. For the best streaming experience, connect to a Wi-Fi network.

Netflix is a popular streaming service that offers TV shows, movies, and documentaries. It’s available in over 190 countries and has over 130 million members.

What is 3G technology?

When it comes to mobile technology, 3G is the third generation of wireless data transmission standards. It is an upgrade from 2G and 2.5G GPRS networks, providing faster data transfer rates and higher capacity. The first 3G networks were launched in 2001, but due to the high cost of infrastructure, they were not widely adopted until the early 2010s.

3G offers speeds of up to 42Mbps, which is a significant improvement over the previous generations. It also supports higher-quality voice calls and video calls, as well as mobile broadband internet access.

In addition, 3G networks are more efficient in their use of spectrum, which means that more people can be using the network at the same time without any degradation in service quality.

3G is the third generation of wireless telecommunications technology. It is an upgrade from 2G and 2.5G systems with faster data transfer rates and improved data security. 3G allows for simultaneous voice and data communication, making it possible to surf the web, stream videos, and make calls at the same time. The average download speed for 3G is between 1-2 Mbps, with peak speeds of up to 42 Mbps.

Does Netflix Use A Lot of Data?

A lot of people are curious about how much data Netflix uses. After all, it is a streaming service that requires an internet connection. And we all know that data usage can add up quickly, especially when streaming video.

According to Netflix, HD streams can use up to 3 GB per hour. That means if you watch two hours of HD content on Netflix on a given day, you could be using up to 6 GB of data.

On the other hand, standard definition streams only use up to 700 MB per hour. So if you stick to SD content, you could get by by using only 1.4 GB of data in a day.

How to Check Data Usage on Your Phone?

If you’re on a limited data plan, you probably want to keep an eye on your data usage. Here’s how to check data usage on your phone.

Most smartphones will track your data usage for you. To find out how much data you’ve used, just go to your phone’s settings and look for the “data usage” option.

Once you’re in the data usage section, you should be able to see how much data you’ve used over a certain period of time. This can be helpful in figuring out which apps are using the most data.

If you see that you’re approaching your limit, there are a few things you can do to cut down on your data usage. For example, try streaming video over Wi-Fi instead of using your cellular connection. Or, if possible, switch to a lower-quality video setting.

As the world increasingly relies on streaming services for entertainment, work, and communication, it becomes more important to understand the difference in quality between different streaming speeds. Here, we’ll take a look at how 3G stacks up against other popular streaming speeds.

3G technology is one of the most common streaming speeds available, but it’s far from the fastest. While it’s certainly possible to stream video and audio at 3G speeds, the quality is often not as good as it could be with faster speeds.

4G is a step up from 3G in terms of speed, and this increased speed can make a big difference in terms of streaming quality.

Comparison of 3G With 2G

3G networks are the third generation of cellular data technology. They were first introduced in 2001 and offer increased speed and capacity over their predecessors. 3G speeds can reach up to 4Mbps, making it possible to stream video and audio content without buffering.

2G networks are the second generation of cellular data technology. They were first introduced in 1992 and offer slower speeds than 3G networks. 2G speeds max out at around 200Kbps, making them suitable for basic web browsing and emailing but not much else.

Can I Stream Netflix With 3G?

Yes, you can stream Netflix with 3G. However, you may experience some buffering and lower video quality due to the slower data speeds Mbps Need For 4K Video Streaming. If you have an unlimited data plan, streaming Netflix with 3G should not be a problem.

But if you have a limited data plan, streaming Netflix could quickly use up your data allowance and result in costly overage charges.

How to Stream Netflix With 3G?

If you’re one of the many people who have a limited data plan, you may be wondering if it’s possible to stream Netflix with 3G. The good news is that it is possible, but there are a few things you need to keep in mind.

First of all, you’ll need to make sure that your 3G connection is fast enough to handle streaming video. Netflix recommends a minimum speed of 0.5Mbps, but we recommend 1Mbps or higher for best results.

Secondly, you’ll need to be mindful of your data usage. Netflix says that streaming an hour of video on 3G will use about 300MB of data, so if you’re on a 2GB/month plan, you’ll want to limit yourself to around 6 hours of streaming per month.

Finally, keep in mind that not all devices can stream Netflix over 3G.

In conclusion, it is possible to stream Netflix with 3G, but it is not recommended. The video quality will be poor and the buffering will be constant. If you have a data cap, you will quickly reach it and have to pay overage fees. It is better to wait until you have access to Wi-Fi before watching Netflix.

The quality of the video will suffer and you will use up your data allowance much faster. If you’re stuck without Wi-Fi and really need to watch Netflix, go ahead. But for the best experience, wait until you have a better connection.